Introduction to the plight of animals in Spain

Spain is most notorious for its cruelty inflicted on bovines — in bullfighting, annual fiestas, and baiting practices. But Spain also joins the unfortunate list of numerous countries throughout the world in its cruel treatment of animals raised for food, animals used in other forms of so-called entertainment, and animals used as research, among other issues affecting animals. 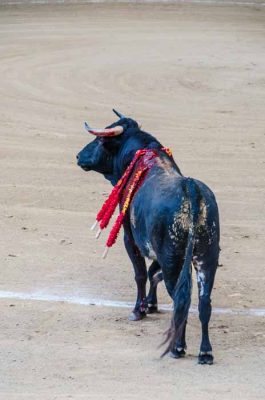 Bullfighting
Bullfighting is a traditional spectacle of Spain, but also of Portugal, southern France, and some Latin American countries (Mexico, Colombia, Ecuador, Venezuela and Peru), in which one or more bulls are ‘fought’ in a bullring. Many animal rights activists consider this to be a cruel, barbaric blood sport, in which the bull suffers severe stress and a slow, torturous death. A number of animal rights or animal welfare activist groups undertake anti-bullfighting actions in Spain and other countries. A new opinion poll on bullfighting in Spain reveals a drastic fall in support of among Spain’s people to this activity, as well as strong opposition to other parties and celebrations. Support has fallen from 30% to 19% in less than 3 years; 84% of the poll’s respondents between 16-24 years of age said they were “little” or “nothing” proud to live in a country where bullfighting is a cultural tradition.

Fiestas of ‘Fun’
Although bulls are mostly used in these spectacles of cruelty, other animals, such as geese, donkeys, goats, and horses are victims of these bloodsports. Some of these festivals include such events as the “Toro de la Vega,” a medieval bull festival celebrated in the town of Tordesillas (province of Valladolid, Spain). The tournament consists of — depending on the sources — the fight, hunt, or chase of a bull by hundreds of lancers, in which some of these will try to lance the bull to death, after he has been released through the streets of the town and led to an open field by the runners and participants. Another event, the toro embolado is a festive activity, typical of many towns in Spain in which a bull with balls of flammable material attached to his horns and set on fire is set free in the streets at night, and participants dodge the bull when he comes close. The ‘Running of the Bulls’ is a practice that involves running in front of a small group of cattle, typically six, of the toro bravo breed who have been let loose on a course of a sectioned-off subset of a town’s streets to celebrate the opening of bullfight season.

Cockfighting
Cockfighting is banned in Spain except in the Canary Islands and Andalusia. Organisations such as the WWF/Adena and some political parties are trying to ban it there too. The law allows it but tries to make it disappear “naturally” by blocking its expansion. Contrasting with the rest of the country (except with Catalonia), bullfighting is instead forbidden in the Canary Islands, since it is not considered traditional, unlike cockfighting. Cockfighting is also legal in Andalusia in the cities and villages where it is considered traditional. With its famous Jerezanos race of fighting cocks, the Cádiz province is the most popular centre of cockfighting in Andalusia.

Intensive animal farming
Intensive animal farm or industrial livestock production, also called factory farming, is a modern form of intensive farming that refers to the keeping of livestock, such as cattle, poultry (including in “battery cages”) and fish at higher stocking densities than is usually the case with other forms of animal agriculture — a practice typical in industrial farming by agribusinesses. The main products of this industry are meat, milk and eggs for human consumption. There are issues regarding whether factory farming is sustainable and ethical.

Vivisection
Vivisection (from Latin vivus, meaning “alive”, and sectio, meaning “cutting”) is surgery conducted for experimental purposes on a living organism, typically animals with a central nervous system, to view living internal structure. The word is, more broadly, used as a pejorative catch-all term for experimentation on live animals by organizations opposed to animal experimentation but rarely used by practicing scientists. Human vivisection has been perpetrated as a form of torture.