Our Campaigns in South Korea

Overview of Our Work in South Korea

1.5 million dogs are consumed in South Korea each year.

We are primarily active in South Korea on behalf of dogs and cats brutalized by the meat trade. We work with activists and organizations within the country to bring about effective change.

The consumption of dog meat in South Korea, where it is known as “Gaegogi” (Korean: 개고기), has a long history originating during Three Kingdoms of Korea, AD C. 57. In recent years, it has been controversial both in South Korea and around the world, due to animal rights and sanitary concerns. Dog meat is also consumed in North Korea, but the extent or form of this activity is unclear.

The consumption of dog meat can be traced back to antiquity, and dog bones were excavated in a neolithic settlement in Changnyeong, South Gyeongsang Province. A wall painting in the Goguryeo tombs complex in South Hwanghae Province, a UNESCO World Heritage site which dates from 4th century AD, depicts a slaughtered dog in a storehouse (Ahn, 2000). The Balhae people also enjoyed dog meat, and the Koreans’ appetite for canine cuisine seems to have come from that era.

Koreans have distinguished Chinese terms for dog “견; 犬”, which refers to pet dogs, feral dogs, and wolves from the Chinese term “구; 狗,” which is used specifically to indicate dog meat. 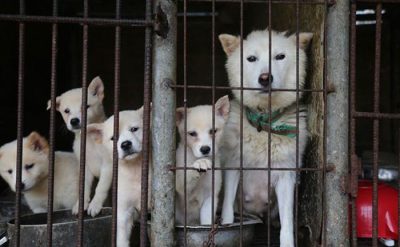 Approximately In 1816, Jeong Hak-yu, the second son of Jeong Yak-yong, a prominent politician and scholar of Joseon dynasty at the time, wrote a poem called Nongga Wollyeongga (농가월령가). This poem, which is an important source of Korean folk history, describes what ordinary Korean farming families did in each month of a year. In the description of the month of August the poem tells of a married woman visiting her birth parents with boiled dog meat, rice cake, and rice wine, thus showing the popularity of dog meat at the time (Ahn, 2000; Seo, 2002). Dongguk Sesigi (동국세시기), a book written by a Korean scholar Hong Seok-mo in 1849, contains a recipe of Bosintang including a boiled dog, green onion, and red chili pepper powder.

The primary breed raised in dog farms for meat consumption, the Nureongi (누렁이), or Hwangu (황구; 黃狗), differs from those breeds raised for domestic pets. The Korea Observer reported in 2015 that many different breeds of dog are eaten in South Korea, and that the dogs slaughtered for their meat may also include former pets.

Although a fair number of South Koreans (anywhere from 5 to 30%) have eaten dog meat at least once in their lifetime, only a small percentage of the population eats it regularly. There is a large and vocal group of Korean people who are against the practice of eating dog meat. There is also a large population of people in South Korea who do not eat or enjoy the meat, but do feel strongly that it is the right of others to do so. There is a smaller, but still vocal group of pro-dog cuisine people in South Korea who want to popularize the consumption of dog in Korea and the rest of the world, considering it to be part of the traditional culture of Korea with a long history worth preserving.

Dog meat is often consumed during the summer months and is either roasted or prepared in soups or stews. The most popular of these soups is Gaejang-guk, a spicy stew meant to balance the body’s heat during the summer months. This is thought to ensure good health by balancing one’s “ki” or vital energy of the body. A 19th century version of Gaejang-guk (개장국) explains the preparation of the dish by boiling dog meat with green onions and chili powder. Variations of the dish contain chicken and bamboo shoots.

During the 1988 Summer Olympics in Seoul, the South Korean government urged its citizens not to consume dog meat in order to avoid bad publicity during the games, along with a request to butcher shops not to hang dog carcasses in the windows. It also closed all restaurants serving Gaejang-guk to better improve the country’s image to Western visitors. A 1998 Salon article reported that despite officially being banned by the government for a decade, nearly 20,000 restaurants at the time were still serving dog meat. South Korea’s successful bid to join the Organisation for Economic Co-operation and Development (OECD) in 1996 prompted a new wave of criticism against South Korea’s dog meat culture. Activists argue that as whale meat consumption declined in Japan after the 1964 Summer Olympics, South Koreans should reduce their consumption of dog meat.

The controversy surfaced again in 2001 during the 2002 FIFA World Cup. The organizers of the games, under pressure from animal rights groups demanded that the Korean government re-address the issue. Brigitte Bardot, a prominent head of a French animal rights organization which is named after her, launched a campaign during the 2002 FIFA World Cup to have dog meat outlawed in Korea. She prompted people to boycott the games if the government did not outlaw the sale of dog meat in restaurants in Seoul. 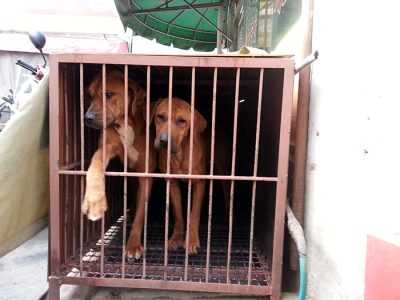 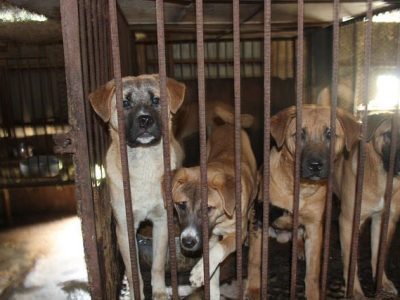 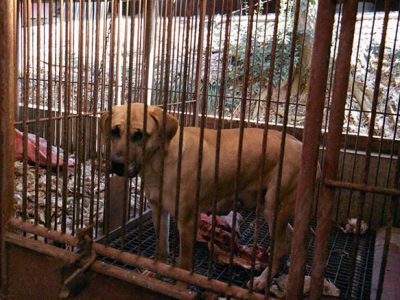 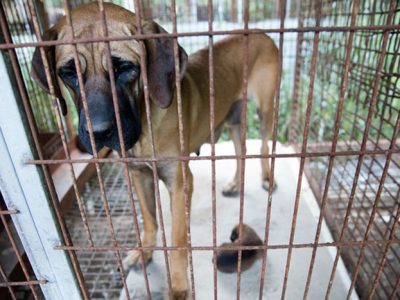 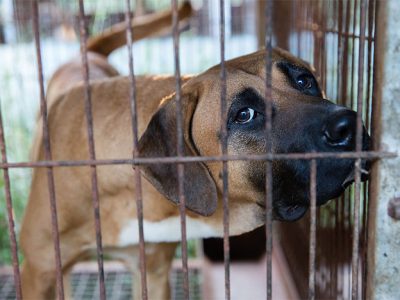 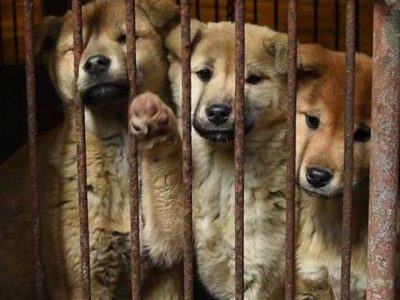 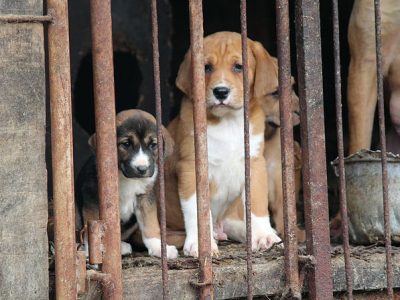 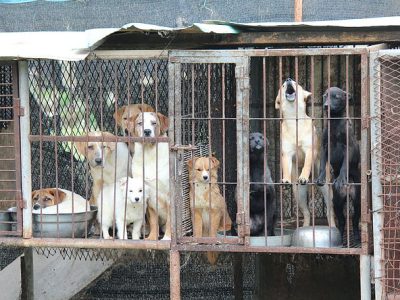 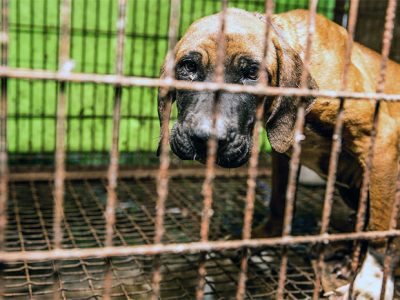 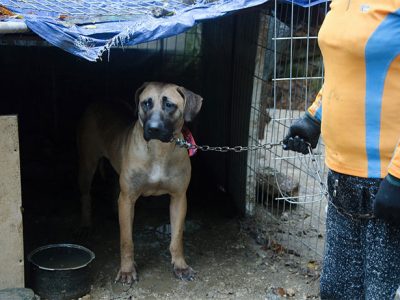 THE ‘STOP IT!’ CAMPAIGN

The eating of dogs has long been a contentious issue in South Korea. Those who defend it say it is a cultural right and an issue of national pride, but with the launch of a powerful new campaign, the country’s dog meat trade may finally be coming to an end.

Saturday, July 1, 2013, saw the launch of the “Stop It!” campaign. This date coincided with the first Boknal or Bok day — one of the three hottest days in the lunar calendar where it is traditional to eat bosintang (dog meat stew) for its purported cooling properties. Over the months of July and August, tens of thousands of dogs are slaughtered for food having been sourced from dog farms, pounds and the pet industry.

The “Stop It!” campaign was launched by the Humane Action Alliance (HAA), a group of animal protection organisations led by Coexistence of Animal Rights on Earth (CARE), Change For Animals Foundation (CFAF) and Animal Guardians.

Unlike many other previous attempts to highlight the issue, the “Stop It!” campaign encourages Koreans themselves to stand up and bring an end to the dog meat industry. It asks whether culture can still be used to justify the continuation of an industry that involves such inherent cruelty to dogs, promotes unhygienic conditions (which pose a risk to both the environment and human health), and often operates in breach of existing legislation.

“It is often argued that eating dog represents a long-standing culture or tradition. But these can never be an excuse, or used to justify cruelty”, explains Park Soyoun, Director of CARE. “There is mounting concern for animal welfare in South Korea with animal protection activism beginning to constitute a mainstream societal issue”.

The launch saw two flash mobs take place in Seoul, directed by Jung Heon-Jae (choreographer of Billy Elliot in South Korea) with music especially written for the campaign by the country’s popular indie band The Rock Tigers. At the same time, a new documentary was released, exposing the cruel and filthy reality of the industry.
The aim of the Humane Action Alliance and the “Stop It!” campaign is to bring about a permanent end to the dog meat industry in South Korea by changing the socio-legal status of dogs and ensuring proper enforcement of the Animal Protection Law. In addition, it will provide the government with a practical and economically viable way of scaling down, and ultimately ending, the industry.

This can only be done by working in collaboration with concerned South Korean citizens and professionals to expose the barriers that serve to defend the industry. Using extensive evidence and comprehensive research, the campaign will demonstrate that the dog meat industry has no place in South Korea today.

“A ban on dog meat in South Korea would have far-reaching implications on efforts throughout Asia to end the cruel production of and trade in dogs for their meat”, explained Lola Webber, Programmes Leader for Change For Animals Foundation. “Today’s dog meat industry is profit-driven, motivated by commercial reasons rather than a desire to maintain culture or tradition, and is not representative of Korean culture.”

The dog meat debate is a highly emotive and contentious issue within South Korea (as well as internationally). With the increase in pet ownership, tolerance for animal cruelty is decreasing and animal activism has become the fastest growing civic movement in the country.

However, there is still a long way to go. Opinion polls show that, contrary to popular belief, younger generations of Koreans are generally still in support of the dog meat industry; and it would therefore be a dreadful mistake to assume this issue will end in time. Now more than ever, the facts about the production of dog meat need to be exposed so that Koreans can learn the truth about this cruel industry and demand that it ends once and for all.